Shower heads can be divided into two types: exposed installation and concealed installation. Most people choose surface-mounted showers in their bathrooms. The advantage of surface-mounted showers is that they are more convenient for maintenance, but the disadvantage is that they are not beautiful enough. Nowadays, in order to achieve a beautiful effect in the bathroom, many families will choose CBM Industry concealed shower head. The concealed shower head can make the water pipe of the shower head be completely embedded in the wall, which can play a flat decorative effect. So which is better, concealed shower or exposed shower? Let's take a look at their advantages and disadvantages. 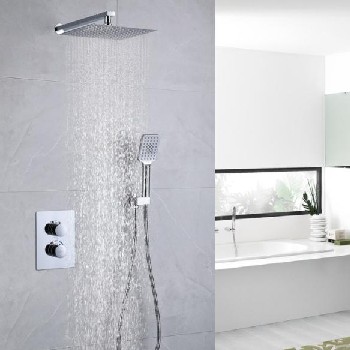 The control part (spool) of the concealed shower needs to be buried in the wall and connected with the hot and cold water inlet pipes. The outlet pipe for the shower spray water is also connected in the wall. After the installation is completed, only flowers can be seen on the wall. The sprinkler control panel and overhead shower, there are no extras on the wall, and it can well serve as a neat and flat surface decoration on the wall.

The overhead shower of the concealed shower is highly optional. There are a variety of large-caliber shower heads to choose from, such as the 400mm large-caliber overhead shower of the German GROHE Ruiyu series, which can easily meet the needs of large-area shower water. A shower experience that cannot be replaced with a shower head. After the concealed shower is installed on the wall, only the shower and the control switch are left on the wall, which will not occupy too much space in the bathroom. It is visually simple and elegant at the same time. The disadvantage is that the main part of the shower head is buried in the wall when the valve core is used for a long time. If there is a problem with the valve core after a long time of use, such as water leakage at the valve core interface, dripping from the shower, etc., the maintenance is troublesome, and the wall needs to be opened. Repair or replace. 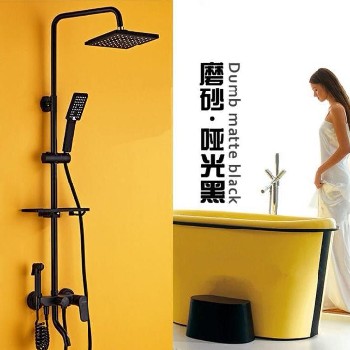 Surface-mounted showers are the most common type of showers used in general households. The control body of the showers, hand-held showers, etc. are all installed on the water supply port reserved on the wall. The installation height is limited by the product itself. The limitations.

Surface-mounted showers are usually composed of shower faucets and hand-held showers. There are also shower faucets and shower columns. Surface-mounted showers are convenient and simple to install. You only need to match the shower faucet with the reserved hot and cold water inlets on the wall. The connection is tight, and the shower rod is fixed or the shower seat is held in hand, and it can be used. Compared with concealed showers, the styles are more optional, and the price is cheaper than installation showers. The disadvantage is that the control body and water supply hose of the exposed shower are exposed outside the wall, and the visual effect is not as good as the concealed shower. The shower body and shower column also occupy part of the bathroom space.

The above is the comparison of the advantages and disadvantages of the concealed shower head and the exposed shower head. Do you now know which of the two shower installation methods is better? Different families are suitable for different installation methods. You can follow the actual situation of your own family layout to choose. Concealed showers are generally installed overhead, which is more space-saving in terms of space structure, but it is not so convenient for maintenance. The installation of surface-mounted showers is very convenient, but the installation of surface-mounted showers in bathrooms will take up a relatively small area, which will easily cause the space to become smaller.